‘With courage nothing is impossible’ 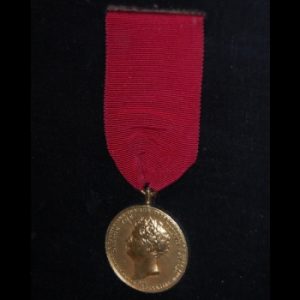 Sir William Hillary, a retired soldier who lived on the Isle of Man, was the visionary behind the formation of the National Institution for the Preservation of Life from Shipwreck (later the RNLI) in 1824. Before the formation of the Institution, a few dozen local lifesaving stations had been set up but there was no co-ordinated national rescue organisation for saving lives at sea. Sir William was inspired to seek a change when he witnessed the crew of HM Vigilant and the fishermen who had gone to their aid being in mortal danger near his home, and was appalled that such a thing could happen.

He decided to take action himself and establish a national rescue organisation. In 1823, he wrote a pamphlet as an appeal to the nation for the foundation of a national co-ordinated lifeboat service. He managed to gain patronage from King George IV and the Prime Minister at the time, Robert Peel. He was also further supported by many important figures of the period as he targeted both the Navy and government. As a result, the National Institution for the Preservation of Life from Shipwreck was formed. The charity was renamed Royal National Lifeboat Institution (RNLI) in 1854.

With Sir William’s encouragement the fledgling Committee immediately implemented a medal system. As rescuers often risked their lives trying to save those who had been shipwrecked, Hillary wanted their efforts to be recognised by the Institution and the public. He suggested that the presentation of a medal to someone who had saved a life would have a profound effect, suggesting that: ‘To many minds, even in the humblest walks of life, such recompense would be more acceptable than a pecuniary reward’. He believed that rewarding people’s efforts would produce excellent results and that they would be inspired to ‘imitate such meritorious an example – thus holding out every species of inducement, to the brave and the generous – to the humble but humane, to render their utmost aid to the shipwrecked of every land, in the moment of their extreme distress.’

Sir William Hillary himself was awarded the highest honour: the Gold Medal for Gallantry. He was awarded an Honorary Gold medal in 1825 as the founder of the RNLI and a further three Gold medals for courageous actions during rescues. During his time working as part of the Douglas crew on the Isle of Man he helped to save over 300 people from drowning. He managed to do this despite the fact that he could not swim, living up to the family motto ‘with courage nothing is impossible’.

On 20 November 1830, he took part in one of his most famous rescues. On this date, the steamer St George was wrecked off the coast of the Isle of Man near the Douglas lifeboat station and Sir William and his crew performed an incredibly courageous rescue, with no lives lost in the attempt. This bravery led to him receiving his third Gold Medal for Gallantry.

The medal system is still in use today by the RNLI to acknowledge significant acts of gallantry in saving lives at sea. Since 1824, 119 Gold Medals for Gallantry and 32 Honorary Gold Medals have been awarded. RNLI Gallantry Medals can be awarded to anyone for gallantry, not just RNLI crew. Although today the majority of those receiving medals are crew members, often the earlier medallists were not crew such as Grace Darling, members of the Coastguard and Navy, fishermen and even clergy. A recent RNLI Gallantry medal was awarded to a GP.

This month’s Curator’s Choice has been guest curated by Annie Corcoran, a student of Exeter University (at the Tremough Campus).