A strange arrival in Falmouth Harbour 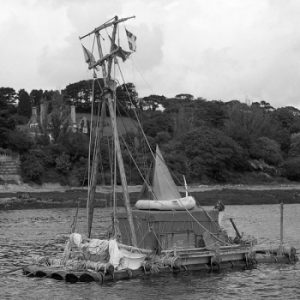 This strange craft, L’Egaré II, arrived in Falmouth on 21 August 1956, having crossed the Atlantic from Halifax, Nova Scotia to Falmouth, Cornwall in 88 days, carrying three men and two kittens, who became the first men in history to achieve this particular feat of endurance.

The voyage of L’Egaré II began with a mad idea; Henri Beaudout, then in his late 20s, believed that it was possible to cross the Atlantic Ocean from West to East by the most primitive raft propelled only by the winds and currents. The crew of the log raft were Frenchmen, Henri Beaudout, Gaston Vanackere and Marc Modena, together with their kittens Puce and Guiton. The raft, L’Egaré II, left Halifax, Nova Scotia on 24 May 1956. This was not the first time that Henri Beaudout had attempted this crossing. His first raft L’Egaré I was wrecked off Newfoundland during August 1955. L’Egaré translates as ‘the lost one’.

The 17ft x 13ft raft was designed by Henri Beaudout and was made of nine logs of red cedar wood from British Columbia that was very hard and tough and yet comparatively light and buoyant, and had a texture that would absorb very little water. The logs were attached to each other with manila rope and the raft had a square sail, 19ft by 14ft made of canvas woven from Egyptian cotton. There was a small cabin and a radio. Permission was granted for the raft to be built at the yard of the Halifax Shipyard Co. Ltd., where workspace and shelter were provided by the yard’s Chief Superintendent.

Having fought cold, hunger, sharks and the unpredictable elements, L’Egaré II arrived in Falmouth Harbour to a very warm reception. The quays were lined with crowds of cheering people, and vessels of all shapes and sizes sounded their sirens.

The Falmouth Harbour Master’s Journal No. 35 records that on 21 August 1956 the raft was towed from Custom House Quay in Falmouth to the Western Ministry of Transport Buoy and moored by Falmouth Harbour Master with two quarantined cats on board. The raft had been towed into Falmouth by the Falmouth and Lizard lifeboats. A further entry in the Harbour Master’s Journal on 30 August 1956 states that the two cats were removed from the raft under Ministry of Agriculture and Fisheries licences and taken to quarantine kennels at Folkestone.

The voyage was dubbed ‘the Atlantic Kon-Tiki’ and was headline news at the time. The crew became celebrities and attended various functions in their honour. The kittens were eventually adopted by the Duke of Bedford, a cousin of Queen Elizabeth II; he agreed to take them in after he had invited Beaudout and his crew to meet him.

The story did not end there. In 1956 the Quebec Government asked Henri Beaudout to ship L’Egaré II back to Quebec, so that it could be displayed in a museum. But, when it arrived no plans had been made and the raft eventually rotted away in a field. However, in 2012, the Captain of L’Egaré II, Henri Beaudout, now in his 80s, together with a group of enthusiastic supporters started a campaign to raise funds to have a full-scale replica of the raft built and placed in a Canadian museum, to finally give the raft and the expedition the recognition they deserve.

This photograph forms part of the Weller photographic collection, part of a comprehensive record of shipping and craft mostly taken in and around Falmouth Harbour and Falmouth Docks over a 36 year period from 1933 to 1969 by David John Weller and his son David. David Weller did not record the name of this raft, but as the National Maritime Museum Cornwall houses the Port of Falmouth Harbour Master’s Journals in the Bartlett Library, it was possible to discover the name and therefore more information about this raft. In addition a copy of ‘The Lost One’ written by Henri Beaudout recording this extraordinary adventure is held in the Bartlett Library.

This photograph is not currently on display in the Museum, but appointments to view the Weller and other collections can be made via the Curator.

A life at sea: the career of Samuel Riley Valler
A welcome lift