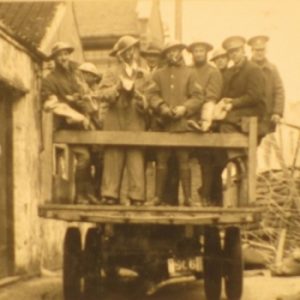 In her long career, HMS Cornwall patrolled the Far East between 1932 and 1933. A photograph album of over 300 photographs was created, recording her travels in the region. Each photograph has been meticulously labelled by hand, showing the date, location and an often amusing title.

The photograph here, ‘A Welcome Lift’, was taken between January and April 1932 in Shanghai. It acts as a snapshot of the period of chaos known as the Manchurian Crisis, which would later be noted as one of the causes of the Second World War.

Manchuria was a province of China and an important source of raw materials for Japan. In 1931 a Japanese owned railroad from Manchuria to the coast was vandalised at Mukden. In retaliation the Japanese Imperial Army attacked a local Chinese garrison. The situation escalated and Japan invaded Manchuria and the port city of Shanghai.

Japan’s invasion tested the Allied system of the League of Nations and its response to foreign invasions. The League’s attempts to arbitrate failed, nor did they follow through with sanctions against the Japanese. This, and other situations, helped to create the chaos which grew into the Second World War.

HMS Cornwall and HMS Sandwich were two of the first ships to be positioned in Shanghai. They were soon joined by HMS Kent and HMS Suffolk, sent by the British government from Hong Kong to Shanghai to help deal with the situation.

The photographs of HMS Cornwall’s travels show many signs of war in the local area, including an aerial bombing of Wusong, a port town near Shanghai. The album demonstrates the unique position that the Navy had in this period, able to witness the build-up of events on the other side of the world that would help to light the fire of the Second World War.

There are several pages of photographs from HMS Cornwall’s time in Shanghai over this pivotal year. They show soldiers training, the ruined city and many refugees. This particular photograph, ‘A Welcome Lift’, shows the more human side. It records men from HMS Cornwall working as volunteers in the Shanghai Volunteer Corps (SVC), which contained Chinese, English, Scottish and American sections. The men in the truck show some of the grim determination and weariness that is often seen in photographs from the Second World War, but perhaps less often seen in an Eastern setting.

The photograph shows a period of respite for the Shanghai Volunteer Corps and how the simple pleasure of a lift back to base and a cigarette provided contentment. The barbed wire and sandbags around them act as a clear reminder of the ongoing violence, but the camaraderie hinted at in the photograph after a grubby and tough day’s work hints at the men’s determination to see things through, and also to live in the moment and take pleasure in a welcome lift.

This Curator’s Choice was researched and written by Clara Lawton, one of the archive volunteers at the museum.

A strange arrival in Falmouth Harbour
Adelaide by Reuben Chappell